MAST’s unit in Poole, Dorset, is the only cradle-to-grave maritime archaeological facility in the UK capable of handling artefacts excavated directly from the seabed through the recording and conservation process to be passed on to the receiving museum. It is currently conserving all the artefacts being excavated from the HMS Invincible project and a small number from other sites such as the London in the Thames Estuary. Once conserved, the Invincible artefacts will be acquired by the National Museum of the Royal Navy (NMRN).

The Archaeological Facility, which it shares with Bournemouth University’s maritime team, is a robust industrial unit of 330 square metres converted after purchase in 2016. Vehicle access is via a 5 metre high and 4.5 metre wide roller doors. The site has full disabled access to the ground floor. 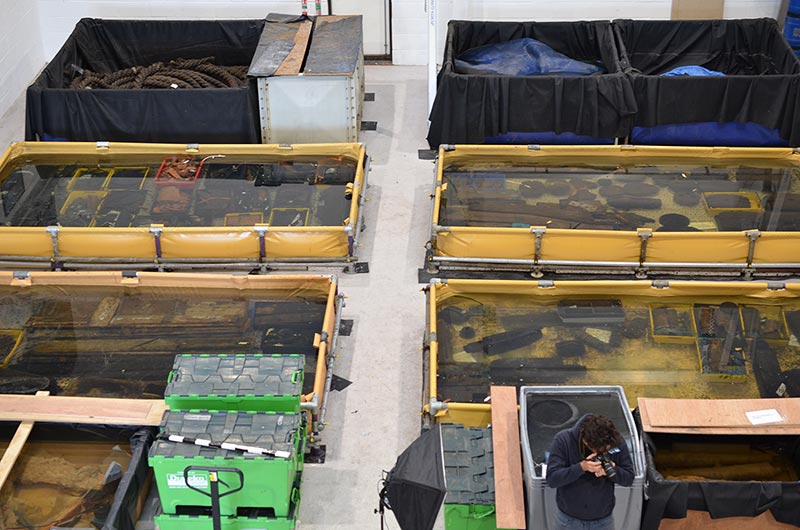 Storage volumes, the unit is capable of storing and processing

Material handling. The unit is capable of handling loads / material of the following sizes

MAST and Bournemouth University are consulting York Archaeological Trust on the conservation of the Invincible artefacts. Some of the most delicate finds were taken to YAT’s laboratory in York.

A quoin used for angling a cannon, being photogrammetised 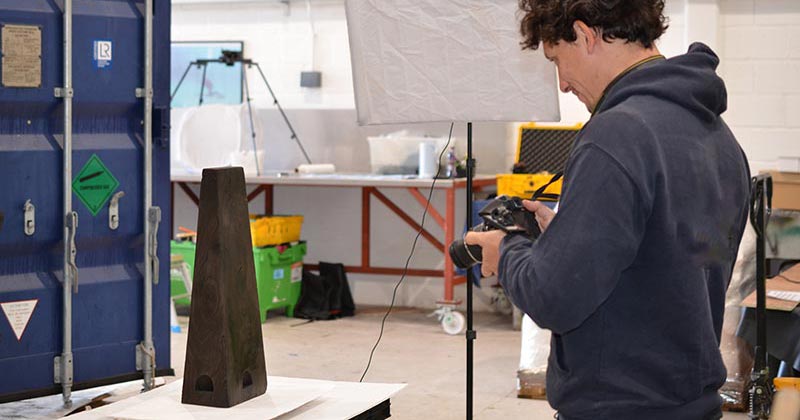 Artefacts that we are conserving in Poole include a large number of ship timbers and wooden artefacts that made up the Georgian Navy’s “Wooden World”. These also include pulley blocks and dead-eyes of all sizes, barrels, limber boards and gun axles.

The team has also raised c.3 tonnes of rope (157 metres from the orlop deck) and c. 2,000 pieces of wadding from different bored guns (the largest collection of wadding found on any shipwreck site). These have been desalinated and washed, some then air-dried whilst brushing off excess sand. The rope will then be conserved by consolidation in diluted PEG wax solutions* and freeze-dried**. Other delicate finds include a glass bottle (intact with cork), several leather shoes. 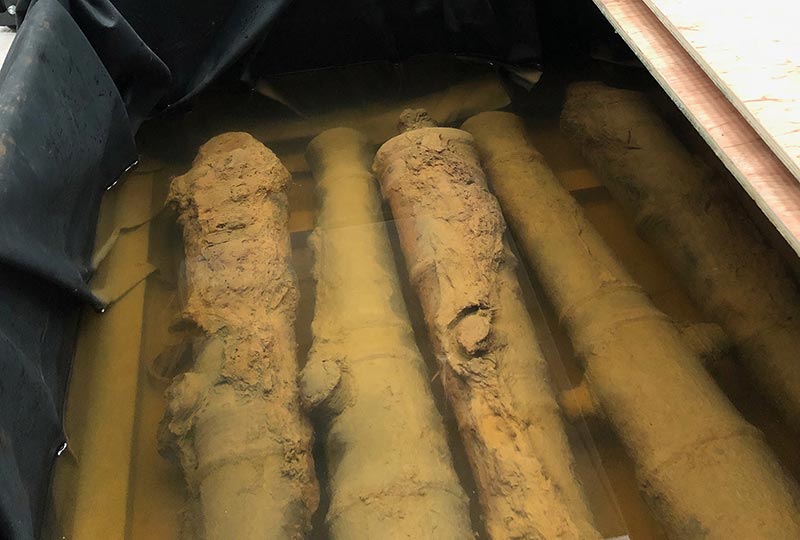 Active conservation work has now begun on the five swivel guns raised in 2018. They are all currently soaking in a 2% sodium hydroxide, a solution which prevents corrosion. Meantime work has begun to deconcrete them - including the bore. Whilst cleaning one of the guns a Broad Arrow was found indicating it was indeed British government property.

Once complete, the intention is to use electrolysis to assist with the removal of the harmful salts from the iron. Electrolysis will take approximately 3-6 months, which will then be followed by a period of soaking in sodium hydroxide solutions to reduce the chloride levels to an acceptable level of less than 50ppm. Once desalinated the guns will be air dried and cleaned and will then require storage or display in a very dry environment, of less than 15% relative humidity. Treatment is estimated to last roughly two years, but this will depend upon the condition of the guns and the amount of chlorides each has absorbed. The one in the photo has a very soft outer surface which indicates a substantial loss of iron from the surface zone which often equates to a high salt content. 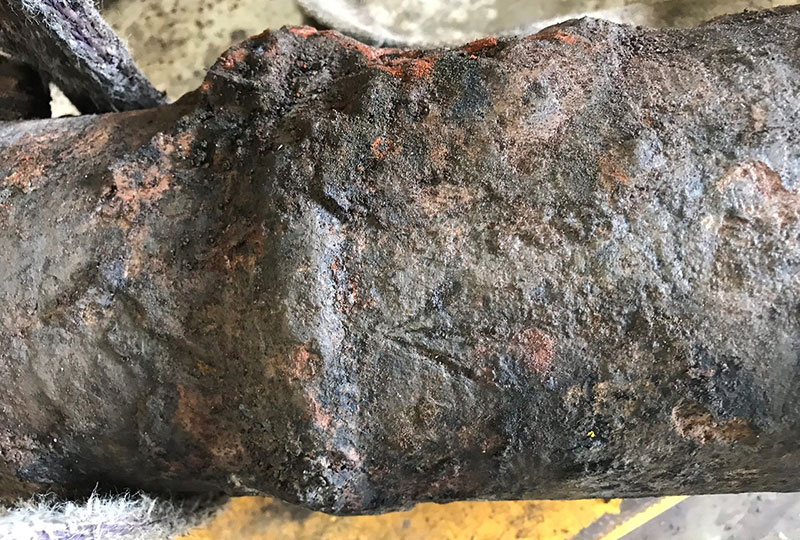 Ian Panter, Head of Conservation for YAT, said: “The fascinating aspect of maritime archaeology is that you are always coming across artefacts that you’ve never handled before, unlike in terrestrial archaeology where you are mostly dealing with “rubbish” discarded by its owners which is rarely in one piece. With maritime archaeology you are dealing with everyday items in their natural environment, almost a time capsule, often finding objects completely preserved as they were when the ship went down.”

One of our most prized and delicate objects is a sandglass, that counted 28 seconds, would have been used for estimating speed. This is currently being looked after at YAT.

A nautical mile was set at 6,080 ft. Knots were set 48 ft apart on the line. One knot, in speed, equates to just over 28 seconds in time. It measured an exact period when a marked log line was run over the stern, the number of knotted marks passing overboard providing a measure of the ship’s speed in ‘knots’. The circular ends are made of turned oak and the vertical posts are of pine. The artefact was perfectly intact, found on a shelf.

The sandglass is a fantastic composite object. It is very fragile and, of course, made up of multiple materials – sand glass, copper alloy, iron, twine and timber.

Its conservation represented a challenge to YAT because of this.

The process:
“As it was recovered from a marine environment it was firstly desalinated through a series of water baths, with levels of chlorides monitored weekly. During the desalination process the concretion was removed from the object’s surface as it was obstructing its surface and was causing instability. This was achieved using a dental pick and small chisel which proved to be the most effective. These tools allowed to chip away small fragments at a time without damaging the wooden frame or the glass globules. Once the concretion was removed, the object was rinsed with reverse osmosis water.

The next stage in the treatment involved immersion of the object in a solution of Polyethylene Glycol (PEG) which was meant to replace the unstable water in the object. After several months of soaking, the object was removed from its PEG bath, frozen and then subjected to the process of freeze-drying. When the freeze-drying process was complete the object’s surface was cleaned of excess PEG and both glass as well as the wooden frame were consolidated. The final step of the treatment involved gap filling of the area which was sampled for wood specie identification (wooden top disc).

The other wooden items were quite straightforward. Below are some images of the wooden plane, wooden folding ruler and wooden gunter scale. The finds stabilised in PEG and then freeze-dried. Before the conservation work commenced a detailed condition assessment, including species identification of the wood was undertaken. This information was then used to choose the most appropriate conservation treatment regime. Both the folding ruler and gunter scale were identified as Box Tree (Buxus sempervirens L.). The plane was identified as Beech (Fagus sylvatica L.).

As the objects had come from a marine context they were desalinated through a series of water baths, with levels of chlorides monitored weekly. Concretions were them removed from the surface using a combination of dental tools and the objects were rinsed in Reverse Osmosis water.

As they were waterlogged the PEG wax was needed to replace the water inside and support the degraded cells. The grade and amount of wax used depends on the species and condition of the object and is decided upon during the initial condition assessment. Smaller objects such as the plane, scale and ruler could be submerged in a wax and tap water solution. The wax is added in 5% increments until the desired concentration is reached. This is followed by a further period of soaking to ensure the wax has fully penetrated into the object.

The objects were then freeze-dried. Freeze-drying is a controlled method for drying organic material. This process removes the water from the wood without causing damage or stress to the structure. It works by freezing the material and then reducing the surrounding pressure in a vacuum to allow the frozen water in the material to sublime directly from a solid to a gas. At the end of the process we are left with a dry object as the water has been removed but the wax remains inside in a solid form, acting as a scaffolding support system for the object.

Once dry the final stage of the conservation treatment involved the reattachment of any loose sections and gap filling for structural support.

And sometimes conservation is simply a large puzzle. Here’s Tom Cousins reassembling multiple pieces to reinstate a large vase. This work took over a week to complete.

*PEG, Polyethylene Glycol is a water-soluble wax, a by-product of the petroleum industry, that is used in the conservation treatment of waterlogged timbers. Once the timber is desalinated, cleaned and recorded, the object is placed in an aqueous PEG solution whose strength is increased over time until sufficient wax has penetrated into the wood cell structure to act as a scaffold, and prevent deformation of the wood during drying.

**PEG impregnated objects are dried in a freeze-dryer. Here the items are frozen to around -30 °C and a vacuum applied to the drying chamber. Under these conditions of reduced temperature and pressure the solid water – ice – is converted directly to a vapour which is then removed from the wood. This technique is a very gentle procedure as removing the water as a vapour reduces the forces applied when water is in its liquid form.

For further information on the work of the conservation team at the York Archaeological Trust, please visit the YAT conservation website or call 01904 663000 and ask to speak to either Ian Panter or Mags Felter.

How to find us

If you would like to visit, please make an appointment at mast@thisismast.org. The address is: