As a result of MAST's work this site has now been designated under the Ancient Monuments and Archaeological Areas Act 1979 as a Scheduled Monument. This now makes it an offence to damage it at any state of the tide. Read the entry here on the National Heritage List for England.

The Bamburgh Castle mystery wreck has revealed one further clue as to its identity. Dendrochronology analysis has given a felling date, a terminus post quem for when this ship must have been built (download the reports from this page for more details including possible links to the castle itself.) 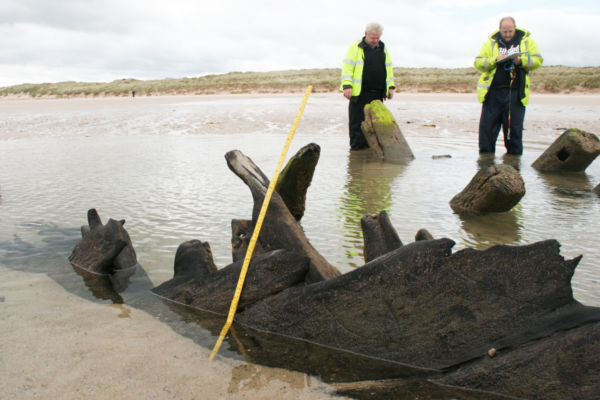 A total of 15 samples were obtained for tree ring dating and wood species identification from a shipwreck. Unfortunately no sapwood survives on this sample so the outer ring of 1758 provides the terminus post quem. On the basis of the samples taken, the ship’s construction is characterised by the use of fast grown, low quality (ie often knotty) oak trees suggesting the timber used was not traded from abroad. The use of different species for specific functions is indicated through the use of Larch (Larix spp.) for the mast and Elm (Ulmus spp.) for a pump structure. Should further timbers become exposed, sampling for tree ring analysis could add to the limited information obtained from the single dated timber. 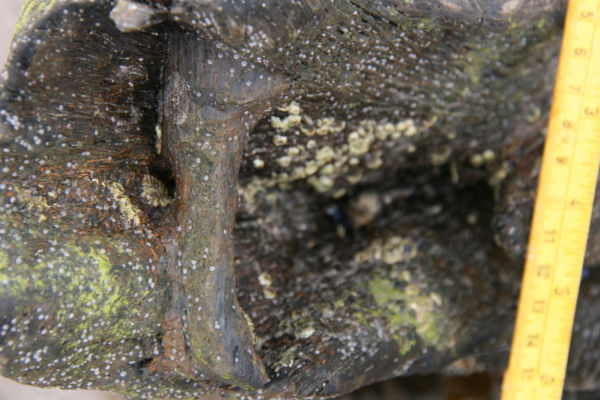 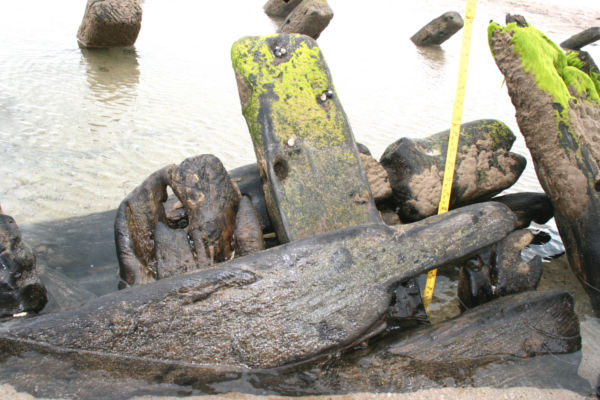 A rarely seen portion of an unknown wreck within the intertidal zone of Bamburgh Castle Beach was reported to MAST by Steve Brown, a PADI Basic Archaeological Diver (BAD) Instructor and local historian. After speaking to English Heritage we decided that this was indeed an unrecorded site and sent a team to conduct a preliminary survey, making use of a spring low tide which allowed for approximately 3 hours of work. The preliminary survey, discussed below, noted all the key dimensions and visible features and gathered some 200 photographs of the site. The survey was conducted by three people, Kevin Stratford (MAST), Jessica Berry (MAST) and Steve Brown (local resident and interested party).

The site lies in the intertidal zone on Bamburgh Beach in Northumberland on the north east coast of England. The beach is made up of fine sand that is well compacted, potentially providing a good level of preservation. The site only appears at certain periods of the tide roughly 1 hour either side of low water slack. The site itself sits within its own scour which, along with the tidal conditions, means that it may never completely dry out.

The structure seems to be relatively unstable as it is exposed to a level not seen for a number of years. As to be expected, deposition is greater in the western part of the site towards the shore and less to the eastern end towards the open ocean. It is exposed to all easterly winds.

The survival and position of some of the features within the wreck would suggest that the buried structure could be mostly intact as the position of hull structure, deck beams, masts and even deck fittings are all as would be expected from a mostly intact buried vessel. Should the starboard side survive under the sand it would potentially offer an unparalleled opportunity to study a wreck with this level of survival within the intertidal zone, there being very few comparable examples currently discovered above the low water line within the UK. The exposed section of the wreck that appears to have been eroded consists of the hull structure of the port side of the wreck. The exposed deck beams suggest the possible survival of decks below the sand (possibly the entire starboard side) which would also be extremely rare within the UK.

The width of the vessel suggested from measuring from the mast, which runs along the centre line of a vessel, out to the edge of the outer hull planking then multiplying by two for the port side would suggest a beam of approximately 9m. A beam of this size would suggest that there could be substantial burial of material under the current sand level, up to 5m depending on survival of the starboard side structure.

The survival of the lower parts of the mast from just above the main deck and possibly down to the mast step would also offer a rare opportunity to study these features within a wreck in the intertidal or fully submerged.

No small finds could be seen exposed on the site. However there is a chance that some may survive within the buried structure. Due to its position within the intertidal zone it is also likely that the wreck underwent some level of contemporary salvage as was and remains in places the norm in coastal communities of the UK. It is also possible that sections of the structure were salvaged for re-use.

The exact level of survival for both structural material along with small finds including personal possessions is difficult to ascertain for certain without further investigation of the site. 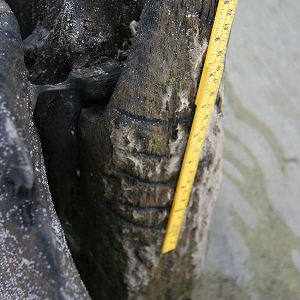 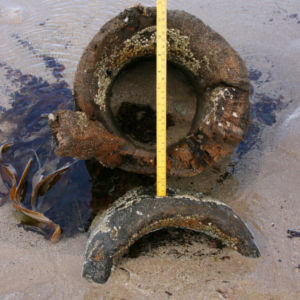 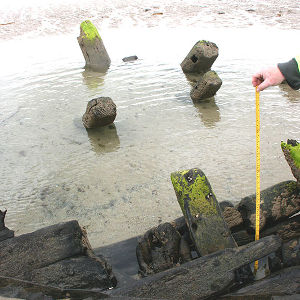 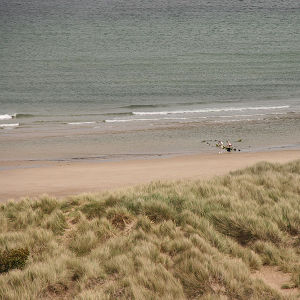 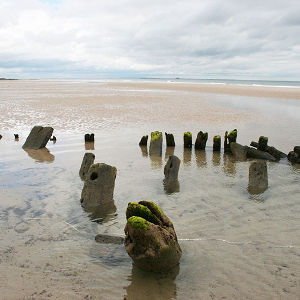 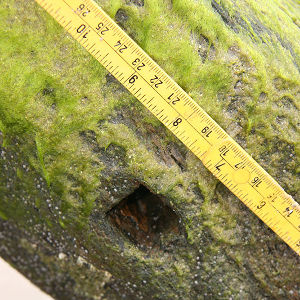